3D printing objects has become faster in recent years and there are several companies working on 3D printers which make parts in minutes rather than hours. Compared to traditional high-volume manufacturing methods such as injection molding or casting, 3D printing is relatively slow on a part production rate basis.Since 3D printers work layer-by-layer with filaments, powders, or resins, they tend to take hours to produce single parts. Also, the finer the detail required, the longer the prints take. 3D printing can be relatively fast for prototyping or for small volumes, since it can take a long time to create a mold or machine a part. If you are making a complex part prototype, then 3D printing is very fast. Generally speaking, complexity of form is free in 3D printing but can be very expensive with subtractive manufacturing methods. However in large volumes, it is still difficult to compete with traditional methods such as injection molding or casting where parts can be created in a matter of seconds.

2. 3D Printing Is Only For Plastics

Due to low costs and ease of use, plastics are the most common 3D printing material. However, there are several types of materials available today such as metals, resins, bio-materials, rubbers, carbon-fiber infused, and wood-fiber infused. Metal 3D printing happens to be the fastest growing segment due to the ability to easily produce low-volume functioning components critical in some industries. Companies and researchersare working on multi-material 3D printers that will take the technology and applications even further.

3. All 3D Printers Are Alike

3D printers range in size, shape, and technology. Some printers are designed as desktop style printers for hobbyists and designers and these can print objects between 10 cm and 30 cm cubed. Other large-format 3D printers can be the size of a desk or a small room and can print parts that are larger than a meter cubed. Not only are there different sizes, but there are 7 different 3D printing technologies: FDM (Fused Deposition Modeling), SLA (Stereolithography), DLP (Digital Light Processing), SLS (Selective Laser Sintering/Melting), EBM (Electron Beam Melting), and LOM (Laminated Object Manufacturing). FDM, SLA, and SLS are the most common and each have their own characteristics. FDM tends to the be most affordable and has a large hobbyist following. SLA can result in higher quality finished parts but is hard to handle, hard to maintain, and a more expensive material. SLS technology can print metal objects such as aluminum and titanium alloys, but is generally even more costly.

4. You Can 3D Print Any Design Easily 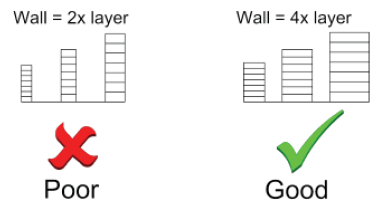 Depending on the 3D printing technology, parts may have to be designed in such a way to make 3D printing possible or easier. You cannot just “instantly” print parts. It takes knowledge to layout the part and choose the necessary settings in the printer’s control software (slicing software). FDM printers have certain design guidelines and restrictions regarding overhangs, minimum wall thickness, orientation, overall size, infill percentage and bridging. Other 3D printing technologies will have their own unique set of guidelines, restrictions, and maintenance required.

3D printing technologies such as SLA and SLS have been producing low-volume functioning components in several industries such as medical and aerospace for several years. The properties of these materials may be slightly less robust than their subtractive manufacturing counterparts, but that does not mean they are off-limits to designers and engineers. For FDM, there has been a surge of new engineering-grade filaments that have higher toughness, temperature resistance, elastic modulus, and impact strength than seen in earlier FDM filaments.

7. 3D Printers Are For Everyone

As much as I would like to see 3D printers in every home, it is likely that only enthusiasts and designers will have the need for 3D printers in their current state. Others who may want an occasional 3D printed part can utilize services such as Shapeways, Fictiv, and 3D Hubs, which deliver fast turnaround times and an array of material options for 3D printed parts. In the future, we may see 3D printing technology advance to print complete systems of parts, whether electrical or biological based, that can have immediate use in a home or commercial setting.

How to Design for 3D Printing
Low Cost Dust Shoe for the X-Carve CNC Router
The Benefits Of Human-Scale Robots
Robot Platform Use Cases: Innovative Robots f...
This site may use cookies to track your activity and provide you with a better user experience. By continuing to use the site, you are consenting to this tracking. Click here to learn more.